From the Pilot Online:

Mark Hardman, the challenger in the race to be commonwealth's attorney, accused incumbent Harvey Bryant on Thursday of failing "to pursue justice against drivers who injure or kill cyclists."

Hardman, a former collegiate cycling national champion, issued the statement a week after Bryant announced he did not intend to file charges in the April 19 crash that killed Daniel Hersh, an ex-SEAL and civil engineer.

"Harvey Bryant has made the decision to turn this tragedy into a travesty," Hardman said. "It is unacceptable that Mr. Bryant has refused to so much as charge the driver who killed Daniel with a misdemeanor."

Hardman, 27, was a prosecutor in Portsmouth for about five months. He was fired after announcing his bid for Virginia Beach commonwealth's attorney.

Bryant's decision outraged many in the cycling community, but he said there was no evidence the driver broke any law. The driver claimed she never saw Hersh, pedaling east on Shore Drive near Starfish Road before 6 a.m., until after the impact, Bryant said. Hersh was wearing a helmet and yellow windbreaker with reflective stripes.

Bryant, 62, said the woman passed a blood-alcohol test and there was no sign she was distracted.

He dismissed Hardman's claim, saying he'd file charges only "when there is substantial, admissible evidence... To do otherwise is considered unethical and unprofessional."

Hardman's comment "comes from someone with almost no experience in criminal law," Bryant said.

My wife can go shopping for shoes and finds dozens in her size.

My brother and father "only" wear a Size 13, and they can find at least 10 pairs.

But I hold the distinction of the largest feet in the family, and I'm lucky to find a single pair of shoes in the store that fit me.

That's it. Forget about colors. You get one model. The Size 10 may be available in seven different colors, but the Size 14 is available is just one color. You should be happy that they even bother to carry a Size 14.

I guess I've learned simplicity, but it annoys the heck out of me when I see a beautiful shoe, but it's not available in @#$%ing Size 14:

Clydesdales need shoeing, too!
Posted by Unknown at 19.5.09 No comments:

The Downside to Spring Cleaning

So I finally admitted that now that I have my Rocket7 shoes, plus a backup pair of Diadoras, I'm never going to wear those ugly, worn-out electric blue Nike mountain bike shoes again, and tossed them last month during spring cleaning.

{My shoes were actually uglier}
And of course, this month I could really, really use them for spare parts...

I'm looking for the SPD shoe plate inserts- the parts that require remove the upper footbed during installation. Usually they have 4 threaded holes where the cleat bolts attach:

I'm in need of the black metal plate underneath the green plastic.

If you've got an old pair of SPD cleats that you don't mind giving up for parts, I'd sure appreciate it!
Posted by Unknown at 19.5.09 1 comment: 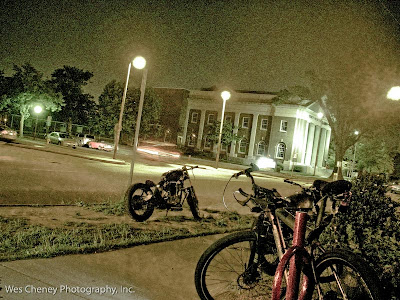 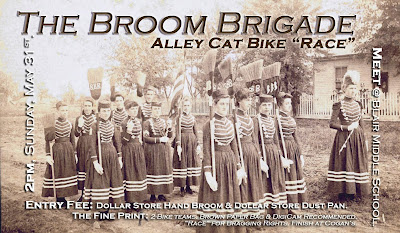 Today [May 15, 2009], VCA president Bill Collins, avid cyclist Dr. Dan Darby, and I met with Va. Beach Commonwealth's Attorney Harvey Bryant about the death of Daniel Hersh. We also addressed the issue of overall cycling safety and ways to address the concerns that we have as cyclists who frequently feel that we don't get a fair shake by authorities.

After spending 2 hours meeting with Mr. Bryant I can safely say that none of us like what we heard but we are all in agreement with his assessment that no charges could be brought against the driver that killed Mr. Hersh. Both reckless driving and involuntary manslaughter charges require "willful intent". Bryant showed us case law and explained what constitutes willful intent. For example, someone that tries to run a red light and kills someone DOES meet the definition of willful intent while someone who runs a red light that they didn't see does NOT meet the definition. If someone falls asleep at the wheel and causes a death they cannot be charged with involuntary manslaughter or reckless driving unless it can be proven they knew they were tired and willfully intended to drive anyway (eg pulling over and taking a nap then later hitting someone, or taking a caffeine pill).

In a lot of the emails and letters to the editor over the past few weeks a lot of people have been angered by Mr. Bryant's statement that the driver who killed Dan wasn't drinking, texting, smoking, doing her nails etc when she hit him and wondered why that would matter. Unfortunately those are indeed required in cases where the driver claims they didn't see the person, whether the victim was a cyclist, pedestrian, or whomever.

If a driver does see a person and hits them then everything changes and they can more easily be charged. That is why in a case like this where there is no proof of distracted driving it becomes vital to have either an eyewitness or have some sort of proof that the driver saw the person that they hit. In this case there was only one witness and their statement actually corroborated the driver's statement that she didn't see Dan. She said that she didn't see him and didn't even know she had hit anyone until she saw him on the ground. The witness said that they came upon the scene as the driver was getting out of the car and that she was looking around perplexed and looking under the car trying to see what is was she had hit and that they had to point to the other side of the car to let her know that Dan was lying there.

We then asked about lesser charges like the obvious fact that she didn't give him the necessary 2 foot clearance but, again, the law requires that you have to see something to give it a clearance.

So, the bottom line is that without evidence of willful intent or distracted driving there was no way to charge the driver with anything, especially since she claimed she didn't see him. I would also add that in the re-enactment that the police reconstruction team did there was a significant glare from the rising sun at the spot where she hit Dan although I thought from the news reports that the accident happened just before sunrise.

One final thought about this case before I get into some other issues that we discussed: Mr. Bryant's only son is a triathlete and rountinely trains out on the roads like we do. Bryant also says he spent hours explaining to his wife why he couldn't charge the driver because as the mother of a cyclist she was upset.

On the subject of general cycling safety a number of issues were raised and I think some headway was made on possible solutions. Instead of writing them in this email I think it would be better to address them in a separate email since there might be a significant number of people that missed reading this missive because they weren't from VB, didn't care about the case, or didn't know what the meeting with the VB CA was about.

So look for another email soon.


Yep, I'm disappointed and frustrated, too, but after reading Jeff's email, I can at least understand a little bit better why no charges were filed.

As a friend said in response, "It looks like we need to change the law."

So please, folks, consider joining an advocacy group, such as the Tidewater Bicycle Association, Virginia Bicycle Federation or BikeWalk Virginia. All of them do an excellent job of lobbying for cycling infrastructure and educating the public.

And ride safe: whenever we're on our bikes, we are ambassadors of cycling: be courteous, be friendly, be seen.
Wes

Join your fellow cyclist as we honor those who have been killed or injured while cycling on public roads. On May 20, 2008, at 7:00 PM, the Ride of Silence will begin in North America and roll across the globe. We are going to ride from Landstown Commons down Dam Neck Road to General Booth Blvd and back. Our ride pace will be between 10 and 12 mph and we will remain silent while riding. Contact Jeff Hathaway at 757-572-1486 or editor_at_tbarides.org for more information. We will gather by the Bank of America ATM in front of Kohl’s.
3344 Princess Anne Road
Virginia Beach, Virginia 23456