Every couple of months of so I find myself trolling through the Norfolk City Municipal Code, and wondering...who the heck wrote this law?!?


OK, now Section 29-21 at the outset looks like it's just referring to incest in the first clause, but then you get to the last clause, which specifically says that it DOES NOT refer to incest. So you may be wondering why anyone went to the trouble of writing & passing this law...Well, ya gotta remember that it dates to 1958, and when they say "persons forbidden to marry," it's code for "miscegenation" (A.K.A. "race mixing.")

On a closer reading, I realized that it could be read to forbid homosexual fornication as well- hey, if you can't marry 'em by law in Virginia, then you can't fornicate with 'em by law in Norfolk!

As for Section 29-22...well, if the NPD actually arrested people for "lascivious cohabitation," then there wouldn't be any room left in the City Jail, and there'd be a whole bunch of flats for rent in Ghent...
Posted by Unknown at 27.8.08 No comments:

The King of Bike Thieves

Canadian police have arrested one of the world's most prolific bicycle thieves after discovering almost 3,000 bikes in his possession.

Igor Kenk, the owner of a bicycle store in Toronto, was held last month after they noticed that reports of bicycle thefts had spiked sharply.

After planting several bikes around the city, plainclothes officers waited to see who would steal them.

Mr Kenk was seen telling a companion to break the bike locks before riding off.

Local and international media reported that in the weeks following his arrest, police found about 2,865 bikes in his used-bicycle store, the Bicycle Clinic.

They also found stolen cycles in his home and in several garages which he had rented.

About 15,000 cyclists have reportedly visited a former police garage, which has been crammed with the seized bicycles, in the hope of being reunited with their lost property.

"It was staggering," Ruth White, the superintendent of 14 Division, the unit that caught Mr Kenk, was quoted as saying. "I've never seen anything like it in 30 years."

More than 400 bikes have been claimed so far.

Ms White said that "tons and tons of beautiful bikes" which are unclaimed may have to be auctioned off after the case is closed.

Mr Kenk is currently out on bail awaiting trial in September where he faces 58 charges including theft and possession of burglary tools.
Posted by Unknown at 26.8.08 No comments: 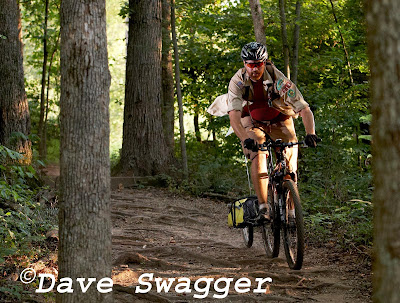 Last weekend I went out to Goochland to shoot video of Cycle Ed's Scouts Honor 18 Hour Race. I had a blast, and even dragged my BOB trailer around the course for a lap- used it as a camera sled. I've got to finish up my Bike Virginia videos first, but once I do, I'll get some video up from Scouts Honor.


Being an Eagle Scout, it only seemed appropriate to wear my scout shirt to a bike race at a Boy Scout camp. My mom dug my old shirt out of the cedar closet (thanks, Mom!), and sent it to
me, along with my Dad's shirt. While I could still fit into my old shirt, it was too tight across the shoulders to be comfortable on the bike, so I ended up wearing my Dad's shirt. Aside from the fact that I didn't attend the 1963 National Jamboree, nor serve as the Troop 216 Committee Chairman, it was all legit.