Not so New, but still Improved! 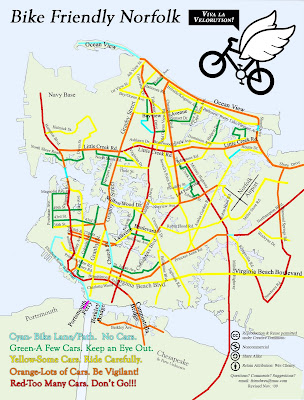 Based on feedback from riders and my own observations of the changing road conditions, I've updated my "Bike Friendly Norfolk" map.

I'm happy to report that most of the changes have been for the better: anecdotally, there are more cyclists out there. More cyclists make for safer roads, as a "critical mass" is established. Colley Avenue, in particular, feels more bike-friendly than it did two years ago, when I first published my map.

East Little Creek Road and Virginia Beach Boulevard have also been renovated: the service roads are now gone from East Little Creek, replaced by a 12-foot wide shoulder that is a bike lane in all but name. I'm looking forward to the roadwork being finished on The Boulevard, bringing it to a similar condition.

Please let me know if you have any suggestions or comments, and feel free to distribute!
Posted by Unknown at 10.11.09 1 comment:

Even though, or maybe because, I started the Monday night ride with Liz some seven years ago (yep, Liz, it's been that long), I've gotten kinda bored with it...The route hasn't changed that much, and chasing after a bunch of übermensch while dragging along a baby trailer gets old after a while...It's been more fun to head out to Ipswich & do trail work.

We tried a different route last night, heading up Granby Street & out to the end of Willoughby Spit. On the way back I rode a lap of the cross-country course at Northside Park. Thirteen crazy folk showed up, mostly on 'cross bikes, and it was definitely an A Pace ride- 19mph+ for most of the way.

Thanks, Robert, Liz & Mike, for suggesting a fun, new route. I never thought I'd see the day when Liz Schleeper would lead a group ride down Tidewater Drive!!!
Posted by Unknown at 10.11.09 No comments:

Race Across the Sky: Coming to Hampton! Thursday Night!!!

Race Across The Sky, the Leadville 100 documentary, will be showing this Thursday night at the Hampton AMC Theatres!

I'm ordering my tickets now- the last bike film I saw in the theater was "The Triplets of Belleville."

"Ipswich? Man, I haven't ridden there in years!"

The rumors of Ipswich's demise have been greatly exaggerated. In fact, there's been a fair bit of grassroots effort in the past couple of months to make Ipswich (A.K.A. Indian River Park) a better place to ride. The Eastern Virginia Mountain Bike Association (EVMA) is negotiating with the City of Chesapeake to officially sponsor the park, at the behest of Southside Hampton Roads mountain bikers who want to realize the full potential of Ipswich.

Here's a short, and probably incomplete, list of some of the work that's been done at Ipswich since the summer: 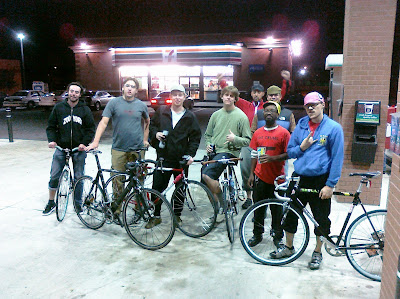 "Hey man, I'll trade you a Davis Phinney for your Bob Roll," one nostalgic hipster said to another under the glow of sodium lights. But before a response could be made, another voice jumped in,

Yup, and so did Chris Carmichael, (yes, that Chris Carmichael), John Tomac and Andy Hampsten. Both Davis Phinney and his wife Connie Carpenter rode for 7-Eleven, too, although Connie was on the women's team with Rebecca Twigg.

Straight outta my high school locker...
"Rebecca wears Protec, or she wears nothing at all."

Riders needed to visit 4 7-Elevens (any four), as well as 7 of 11 "recycled" Norfolk 7-Elevens. "Premiums," or time bonuses, were offered for bringing back receipts from more-distant 7-Elevens. And a 27 minutes time bonus was offered for photographic proof of a recycled 7-Eleven not listed on the manifest.

Matt scored by finding a "7 Brothers" convenience store that not only recycled a 7-Eleven store building, but also ripped off the 7-Eleven logo for their sign! Kudos to Matt for a long, solo ride in the dark! 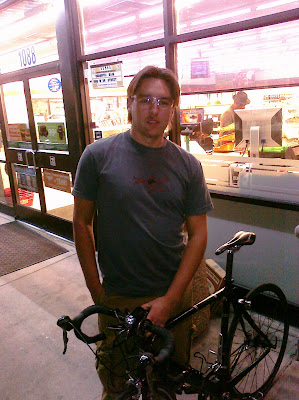