What's under that Kilt?

Q: What does a man wear under his kilt?
A: None of your darn business.

I find it annoying and amazing that people who have never worn a kilt in their life will ask me if I’m wearing my kilt “traditionally.” In their minds, that means that I’m not wearing underwear under my kilt.

Unless you’re on Spring Break in Daytona Beach or picking up a hooker, it’s not considered polite to ask a stranger, or even an acquaintance, “Are you wearing underwear?” But somehow it’s considered normal, even expected, to ask a guy in a kilt, “What do you have on underneath?”

Remember back in 1992 when some smart aleck college kid asked Bill Clinton on national television, “Boxers or briefs?” The norms transgressed in that question are the same ones that titillate people when they ask a guy in a kilt, “How’s it hanging?” Remember when Marylin Monroe stood atop a steam vent and we all saw her undies? Ditto.

Where does this odd norm originate from?

Let me preface this by stating up front that I DO wear underwear under my kilt. The few times I’ve tried “going commando” I have briefly appreciated the freedom of my testicles hanging unhindered, but quickly the chafing of my penis on wool/acrylic/cotton was so irritating that I quickly slipped into something more comfortable. Maybe other guys who are uncut and have an intact foreskin hang differently. I’m also not a boxer short guy. I prefer bike shorts, or briefs tailored like bike shorts. When I wear my kilt on my bike I wear bike shorts underneath. It’s just comfier that way.

There are both historical and contemporary origins for the “myth” of the True Scotsman. Since at least the Twentieth Century it has been a custom for drunk Scottish hooligans to lift their kilts and expose themselves to rivals and women. Rivals are supposed to be scared, while women are supposed to be excited. The women who’ve been flashed by drunks in kilts tell me they’re more scared than turned on.

I have never gotten drunk with a bunch of friends in kilts and said, “Let’s show our stuff off!” I don’t understand that mindset at all. But I’m also not a big team player/sports fan/crowd joiner. Maybe if I was “that kind of guy” I’d think it would be funny to paint my cock and balls in the team colors and show it to the world, or show a girl the ribbon I’d tied around myself. 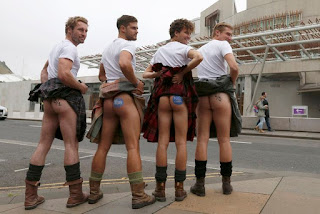 When the kilt was uniform issue in the British Army, there were regiments that enforced a no-undies policy during parade inspections. Having served myself, I know that what is expected for parade isn’t necessarily worn every day (just witness the 13-button fly on American Navy sailor suits). There may have been British sergeant majors with mirrors on golf clubs inspecting their underlings nether regions, but I’m sure it was just another way to humiliate the troops into disciplined compliance, and thus make them more fit to join the forlorn hope.

Historically, some Scots did wear shorter kilts, but not by choice. During the Napoleonic Wars, “Highlander Regiments” were all the rage in Great Britain. (I guess when you’re being recruited to be cannon fodder, a kilt would be an attractive bonus.) The English system of outfitting armies wasn’t what it is today- at that time the commanding officer was personally responsible for clothing his regiment, and would be given a government allotment to do so. Cheapskate commanders skimped on the length and breadth of their regiment’s kilts, and kept the extra money for themselves. During the occupation of defeated France by the Allied powers, many a French lass got to see what was under a Scotsman’s kilt. The advent of mass-produced prints at the time perpetuated the stereotype of short, regimental kilts. 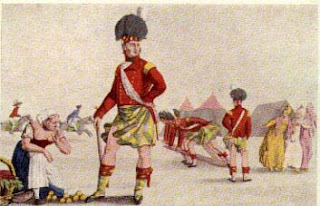 So let’s call this contemporary tradition what it is: Sexual Harassment. It’s an assertion of power over another person. We used to think that it was cute or funny if a guy (and it’s almost always a guy) walked around in a trench coat exposing himself to strangers. Nowadays it’s frowned on, and usually treated as a crime. A woman exposing herself is expected to be drunk, and called a slut. But she’s not usually charged with a crime and blacklisted from society as a sexual predator, as guys (justifiably) are.

Here is my challenge to inquiring minds- if you want me to tell you what I’m wearing under my kilt, then you have to tell me what you’re wearing under your pants.  Give as good as you take, I say. And if you can’t take it, then don’t give it.

If the kilt is an expression of freedom from societal norms of couture, then there should be a corresponding freedom to wear a kilt any darn way you like. And if you don't agree with me, then you're no true Scotsman.
Posted by Unknown at 3.2.16 1 comment:

It’s the question I hear the most when I’m wearing a kilt, on a bike or off. Sometimes it’s called a skirt, or a dress. But folks are always curious, even if they’re not always polite. So here are my Top Five Answers:

5. It’s my heritage. Ok, this is a bit of a stretch. Only my great-grandmother was a MacDonald, so that’s not much of a claim to Scottish identity, as it makes me about one-thirty-second Scottish. And to be honest, I find the MacDonald tartan somewhat ugly, at least in the base version.

4. I split pants like Ron Jeremy. I’m 6’5” tall, with a 36” inseam, and a waist that varies between 38 and 42”. Finding pants that fit is literally a pain in the ass. Pants that look good aren't comfortable. Pants that are comfortable don't look good. A pair of Dockers or Levi’s may look fine, but I can’t pop a squat without busting a crotch. I can spend eighty or a hundred bucks on a pair of pants, only to have them rip apart the second or third time I wear them. Because of my thick, muscular thighs, pants that fit in the waist don’t fit in the legs. And pants that are loose enough in the legs usually fall off my waist. Baggy sweatpants and camouflage, battle-dress-uniform (or “cammies”) feel good, but they look sloppy. Specialty manufacturers sell trousers with diamond-gusseted crotches, but they’re hard to find and pricey.

3. I’ve got the legs for it. I bike and walk every day. I’ve got tight thighs and bulging calves. If you’ve got it, flaunt it. I get compliments on my kilts every day I wear them, and that feels pretty darn good.

2. Riding a bike is hard on pants. I’ve blown out the crotch on too many pairs of pants, throwing my leg over the saddle. I’ve caught the cuffs in the chain, and torn the knees when crashing. There are more knickers on the market now than there once were, and yoga pants (not leggings) are also comfy on the bike. But the number one reason I wear a kilt is…

1. Comfort. My kilts are comfy on the bike and off. They’re cool when it’s hot, and warm when it’s cold. They don’t bind or chafe my legs and nether regions. I don’t get cramps in my back from belts tightened too much to keep up sagging pants.