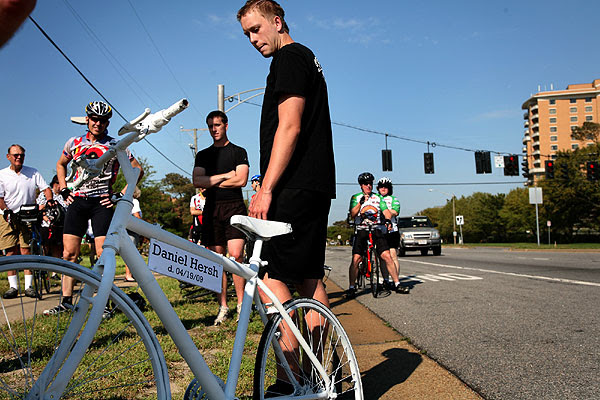 As it stands now, any driver in Virginia can get away with killing a cyclist by simply claiming, "I didn't see them."

The awesome guys at the Virginia Bicycling Federation have been working on the state level to introduce legislation that would create safer roads for cyclists. Senate Bill 928 and HB1683, the "Three Foot Passing Law," would increase the legally-required minimum passing distance from two to three feet. If enacted, the law would also require motor vehicle operators to maintain a safe, reasonable distance when following ANY vehicle on the road, be it a bicyle, a moped, an electric wheelchair or a scooter. The law doesn't absolve cyclists from the responsibility to ride in a safe manner, and as close to the right side of the road as is practical, but it will afford us legal protection.

Senator Yvonne Miller, of Norfolk, and Delegate Jeion Ward, of Hampton, are members of their respective Transportation Committees, which will shortly be considering Senate Bill 928 and HB1683, the "Three Foot Passing Law." If you live in Hampton or Norfolk, please contact them TODAY. Below is an email that I sent to Senator Miller:
Dear Senator Miller,
As your constituent and a practical cyclist, I urge you to support Senate Bill 928, which has been referred to the Transportation Committee. SB928 would require motorists to maintain a reasonable, safe distance behind not only cyclists, but also persons using electric wheelchairs or mopeds. Such vehicles would still be required to operate as far to the right on the road as is practical and safe, but motor vehicle operators would be required to pass them at a distance of three, instead of two, feet.
You may recall that less than two years ago a local cyclist, Dan Hersh, was struck and killed from behind by an inattentive driver on Shore Drive. Dan was a retired Navy SEAL, a father of two, and a very experienced cyclist. In the opinion of the Commonwealth Attorney, Harvey Bryant, Dan was operating his bicycle in a responsible manner, with all required safety equipment. The driver who rear-ended and killed Dan claimed that she "didn't see him," and Harvey Bryant declared that there was therefore no existing legal basis for prosecution. The driver did not lose her right to operate a motor vehicle, receive points on her driver's license, pay a fine, or even pay restitution
As it stands now in Virginia, a motorist can be absolved of any responsibility for killing a cyclist by simply claiming, "I didn't see them." The cycling community in Norfolk and Virginia Beach was outraged to learn that while we have the legal responsibility to follow all the rules of the road, we are not afforded the right to justice under the law.
Our Governor, Bob McDonnell, has declared that we must be innovative in solving our transportation problems. When ridden in a safe and responsible manner, bicycles can be a low cost, local solution: 25% of all trips are made within one mile of home, yet 99% of the time, that trip is made by car. If we create a legal environment where cyclists are respected as equal road users, we will see more people choose their bicycle instead of a car for short trips. That in turn will result in less consumption of gasoline, less wear and tear on our roads, less cost in maintaining our roads, less pollution, a healthier population, lower healthcare costs, and a higher quality of life for all persons.
Thank you for your support,
Wes Cheney

If you don't know your the name of your delegate or senator, it's just a few mouse clicks away: check out Who's My Legislator?

If you want to learn more about "vulnerable road user laws," check out the VBF blog, written by local cycling advocate Bruce Drees.