So I half-stumbled into leading a Bike Commuting Workshop at the Fair Trade Festival next month in downtown Norfolk, and found myself asking newbie commuters, "What would you want to learn? What do you need to know in order to commute confidently?"

Yes, everyone needs to know how to ride predictably in order to be able to safely share the road with cars, but time and again I was asked about safe bike routes around Norfolk.

So folks, I present the Bike Friendly Norfolk Map: 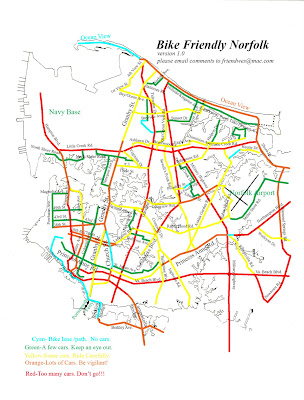 As I said, this is the beta version. There's still a fair bit of tweaking that needs to be done on the map to make it more user-friendly. If you've got suggestions on routes & such, please let me know. We'll have the final version ready for the Fair Trade Fest, Saturday, December 1st. The Bike Commuting Workshop will be from 11-1.

I also created an online version of the Bike Friendly Norfolk Map on wayfaring.com. However wayfaring.com doesn't allow for selecting route colors, so it's more difficult to convey road information. But if anybody out there is web-savvy enough to do that sort of stuff, let me know...
Posted by Unknown at 16.11.07 1 comment:

VA Beach: Bikes on Roof Racks, Not on Roads

It seems like at least once a year I hear about another cyclist getting hit by a car on Shore Drive in Virginia Beach, as happened to Maxine Roberts last week. Which reminds me of why Tom Coghill canceled the Celebration of Life bike ride in VA Beach- the municipal government is biased towards cars, and is unwilling to spend the money to actually create safe cycling infrastructure. The safest place for a bicycle in Virginia Beach is on the back of a Hummer.

Folks, if you want to see this sad state affairs change, then you've gotta get out there and do something about it. Riding your bike is a good start. Lobbying city council is even better. Join a cycling advocacy group, and get active!
Posted by Unknown at 16.11.07 1 comment:

This whole story just raises too many questions- like, were there no sheep around?

A [Scottish] man caught trying to have sex with his bicycle has been sentenced to three years on probation.

Robert Stewart, 51, admitted a sexually aggravated breach of the peace by conducting himself in a disorderly manner and simulating sex.

Mr Stewart was caught in the act with his bicycle by cleaners in his bedroom at the Aberley House Hostel in Ayr, [Scotland].

Gail Davidson, prosecuting, told Ayr Sheriff Court: "They knocked on the door several times and there was no reply.

"They used a master key to unlock the door and they then observed the accused wearing only a white t-shirt, naked from the waist down.

"The accused was holding the bike and moving his hips back and forth as if to simulate sex."

Both cleaners, who were "extremely shocked", told the hostel manager who called police.

Sheriff Colin Miller told Stewart: "In almost four decades in the law I thought I had come across every perversion known to mankind, but this is a new one on me. I have never heard of a 'cycle-sexualist'."

Stewart had denied the offence, claiming it was caused by a misunderstanding after he had too much to drink.

The bachelor had been living in the hostel since October 2006 after moving from his council house in Girvan, [Scotland].