So AltDaily has given me a great forum for creative nonfiction. The big pieces.

And Facebook has become my recording tablet of odd & amusing miscellanea.

Now I'm spending my days in my garage, building bikes and (hopefully soon again) a boat.

So it's not that I don't love you, FotoByWes.blogspot.com, it's just that I'm not in love with you.
Posted by Unknown at 27.9.10 No comments:

This Friday & Saturday there's an awesome opportunity to learn to ride more confidently in the city.

Bruce Drees will be teaching "Traffic Skills 101," a course aimed at the neophyte urban cyclist, here in Norfolk.

It's a two-part class: classroom & on-the-road. A bicycle & helmet are required. There's a $35 fee to cover instruction materials.


So if you want mad bike skillz, this is the class for you!

http://www.bikeleague.org/cogs/programs/education/course_detail/3694
Posted by Unknown at 21.6.10 No comments:

“Don't come over here and give me SHIT for riding on the sidewalk!”

So said Officer Rogers of the Norfolk Police Department, standing astride his bicycle on the sidewalk of Plume Street in downtown Norfolk during the opening hours of Harborfest 2010.

I was riding my bike home on Plume Street (with traffic, in the street), a little after six o'clock, when I saw Officer Rogers and Officer “Blank” riding the opposite direction on the sidewalk (the nametag was missing from the velcro strip on Officer Blank's uniform).

I looked behind me and made a u-turn on my bike as Officers Rogers & Blank stopped on their bikes, too. I pulled up in a driveway to a construction site, and asked Officer Blank as he started to ride around me,

“What in the performance of your duties requires you to ride on the sidewalk right now?”

“Why do you feel the need to ride on the sidewalk right now?”

“Because I can ride on the sidewalk.”

“Let me ask you something: what do you do for a living?”

“I'm a photographer,” I replied,

“Do I come around and give you SHIT while you're taking pictures of flowers? NO! So don't come come over here and give me SHIT for riding my bike on the sidewalk!”

At this point, Officer Blank chimed in, “Well we're cops because we like danger: maybe that's why we ride on the sidewalk.”

Officer Rogers went back on the attack, “Have you ever taken a PHOTOGRAPH of a dead police officer?”

“Actually, yes, I have,” I replied, stretching the truth only slightly: from firsthand, forensic photography I know the punchline to the joke, “What do you call a guy floating in the ocean with no arms and no legs?” Answer: “A naval aviator.” (I spent some time photographing in the morgue of the Portsmouth Navy Hospital, and Navy pilots are the cops of the ocean skies.)

“Don't you have anything better to do?” Officer Rogers continued,

“And you rode your bike over here ON THE SIDEWALK to tell us that?”

“Actually, officer, I'm not on the sidewalk,” I observed, looking down at the curb cut and parking lot driveway where I was standing, astride my bike.”

Officer Rogers was furiously quiet for a few moments as he realized that I was, indeed, in compliance with the Norfolk city code. Then he gathered himself up and presented the best justification yet,

“We are patrolling the downtown area and keeping citizens safe. For that reason, we are riding on the sidewalk.”

I think Officer Rogers knew that it was a lame excuse, but strong enough to stand up, should his Sergeant inquire. And I look forward to hearing from the Norfolk Police Department as to their guidelines for officers exercising their legal permission under Section 23-398 of the Norfolk Municipal Code to operate bicycle on the sidewalk:

Host Our Coast is looking for both a video and a sample blog. So, here's the blog to tell the rest of the story of the 3rd Annual North American Handmade Bike Show:

Bikes on the roof, wheels in the backseat, and another I-64 traffic jam in front of us. We're usually impatiently waiting to ride when stuck on the highway, but today we had hit the road to look at bikes. From Ontario to Delmarva, almost 7,000 cyclists headed to Richmond, Virginia for the 3rd Annual North American Handmade Bike Show, held February 25-28. When the show started in Portland, Oregon two years ago there were just 700 tickets sold.

Like music, bicycles have become both a commodity and an art form. Taiwanese mountain bikes are churned out almost as fast as teeny-bop MP3s, and have just as brief a lifespan. “Real” bikes, like real music, are a labor of love, crafted with patience and attention to detail by artists, treasured and shared by often-fanatic followers. With a punk rock, D.I.Y. ethos, bike builders start tinkering in garages. Many labor on in obscurity, a few make a living at it, and only rarely do any gain fame. For every Gary Fisher or Alex Moulton (near-household names on their respective sides of the Atlantic), there are dozens of lesser-known, but equally gifted, master builders.

The hallway outside echoed with the tick-tick-tick of freewheel hubs as cyclists pushed their bikes to the indoor valet parking. Inside, a humdrum convention hall had been invaded by a caravan of callused hippies and their temporary emerald city of chrome and pedals. A minimalist bike of mercury and silver glowed under tracklighting—two wheels, two pedals, a handlebar and a seat on the sleakest of metal frames. No brakes, no gears, no handlebar tape, no bells, no whistles. A track-inspired "fixie," or fixed-gear bicycle: without a freewheel, the pedals and rear wheel are chained together, and the cyclist's legs become the brakes.

Bilenky Cycle Works out of Philadelphia was awarded “Best road frame” in the show. Owner Stephen Bilenky brought his staff along with nearly all the tools, fixtures and dust from their shop- a dozen unfinished frames lined the back wall of their “display booth” above a workbench, invoices hung on clipboards beneath a decades-old clock. Potential patrons lingered around single and tandem bikes, pointing to details, talking and dreaming of riding.
Just down the aisle was the legendary Craig Calfee, a bike messenger turned bike builder. In the Nineties he was on the forefront of carbon fiber bikes, and now in the 21st Century he is a pioneer and prophet of bamboo bikes. A three-seater road bike with bamboo tubes as thick as oil cans stood next a “traditional” carbon fiber road bike.

In years to come, the third annual North American Handmade Bike Show may become our generation's cycling Woodstock: many who were never there will nonetheless say they were for the significance of it: Rock 'n' roll is here to stay, and so are handmade bikes. All you need is three gears and the truth, the rest is up to you.
Posted by Unknown at 16.3.10 No comments:

I need your vote to Host Our Coast! I'm one of 34 journalists vying to get a 3 month gig covering ecotourism on the Delmarva Peninsula...Vote and video views drive the selection process. Check me out, and the competition, too.

Big thanks go out to the Hebners for being such great hosts and keeping an eye on Abby while Liz & I chased after a story. This Just In: Condos at Ipswich... 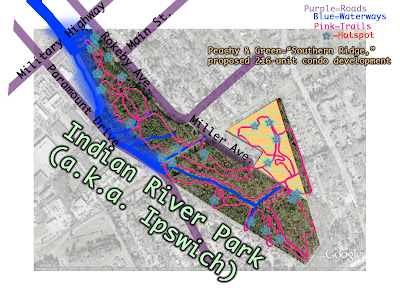 I've got a big old can of I-told-you-so to open up...The City of Chesapeake is reviewing plans for "Southern Ridge," a 216-unit condominium development on 18 acres of land that abuts Indian River Park.

For the better part of two decades local citizens have developed bike trails and dirt jumps on this parcel of land. It's a shame that it wasn't incorporated into Indian River Park from the start.

So here's the $64,000 question: what's that land worth, and what's it gonna take for cyclists in Southside Hampton Roads to preserve the only singletrack park left?
Posted by Unknown at 8.1.10 No comments:

First Blog of the New Year

I've been struggling to blog efficiently with my new Palm Pre- thumb-typing through a mobile-unfriendly website isn't the most productive or rewarding use of my time. (Hyperlinks are a horror.) And I haven't carved out a new time to sit with a laptop or desktop to type & blog.

I have, however, become a satisfied user of FaceBook Mobile: I can shoot a picture on my Palm Pre smartphone, email it to FaceBook, and it's automatically posted to my mobile upload album. I no longer have to download pix from a camera, process them through Lightroom, export, upload & publish them. My FaceBook Mobile Upload album has become a photo journal.

I've been subscribing to the Photojojo for at least a year now, inspired by new techniques & equipment. In no small measure, Photojojo has fueled my love affair with the LensBaby. So I was stoked when I received the latest email newsletter with a link to my favorite philosopher of photographer, Roland Barthes:


" A photograph is always invisible, it is not it that we see."

You're not looking at the pixels or silver crystals or toner dots.
You contemplate the message, not the messenger.
We watch what's on TV, not the television set itself.
Posted by Unknown at 5.1.10 1 comment: