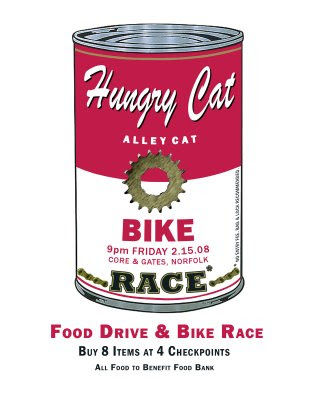 I've had a few questions about the course and the rules for the Hungry Cat Alley Cat Race next Friday the 15th, so let me take this opportunity to explain a few things, while still retaining an air of mystery...

The Winner
The Winner will be the first person to reach the finish with receipts from the 4 checkpoints and all 8 food items.

Distance
There's no set course, but expect to cover 8-10 miles to reach all 4 checkpoints.

Checkpoints
Now I'm not going to spoil the fun and tell y'all where each checkpoint is, but suffice it to say that they will all be supermarkets located around Ghent, Downtown Norfolk and South Norfolk. That's right, I said, South Norfolk...Get ready for some climbing, kitty cats!

Food Items
I'm not gonna say what's on the shopping list, but each participant will get the same shopping list. There will be 8 items on the list (no meat, no dairy). Now depending on whether you buy name brand or generic, you'll spend $10 or $15.

Bags
If you want to be all ghetto & hang plastic bags off yer handlebars...
Fine, go right ahead.
Me?
I'm bringing my trusty messenger bag.

Locks
If you want to be all ghetto & leave yer bike lying unlocked in front of the store...
Fine, go right ahead.
Me?
I'm bringing my trusty Kryptonite.
(course, you could tag team it with a buddy...)

Helmets & Lights
You'd Look Hotter in a Helmet.
As for lights, well, they're pretty useful for avoiding the beer bottles on the Berkley Bridge footpath!
Posted by Unknown at 9.2.08 3 comments: 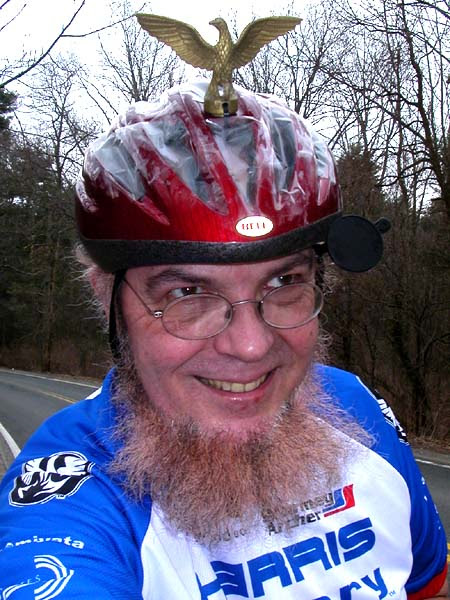 So this is the opportunity for all of us to mumble platitudes to the effect of,

"Sheldon Brown isn't dead as long as he lives in the hearts and legs of cyclists anywhere!"

"Sheldon Brown isn't dead as long as helmet mirrors save your ass from the overloaded dump truck coming up the shoulder!"

But Sheldon Brown is dead.

I never met Sheldon myself. The closest I got was a few years ago when I stopped by his shop, Harris Cyclery, in the Boston suburbs. I was waiting for a prescription to get filled for my infant daughter at a nearby pharmacy, and figured I'd see if I could see the legend. Unfortunately he'd just stepped out, and now I don't suppose our paths will cross again.

Sheldon became a crazy, beloved uncle to me through his website. It was probably four years ago that I first stumbled upon it when I was building up my first singlespeed mountain bike. (I'm now on my fourth SS frame, but that's another story.) I devoured Sheldon's site, learning all I could about (in no particular order) singlespeeds, fixed gears, eccentric bottom brackets, hub brakes, disc brakes, caliper brakes, Brooks saddles, internal hub gears, tandems, tandem touring, tandem drivetrains, and spoke theory. The fate of Sheldon's website is unknown, so check it out now, while you still can.

The only thing that Sheldon seemed to love more than cycling was introducing that passion to others.

You Can Count me as One of Your Posse.