Fifteen Hours of Misery and Joy

Only about a mile up Hankey Mountain the cramps started in earnest. Everything from my ass down seized up. I tried standing up out of the saddle, but that only made my thighs and calves knot even tighter. Giving up on pedals, I dismounted and started pushing my bike up the mountain...

Oh well, I thought, glancing down at my legs, at least when my quads are cramping they look really ripped!! 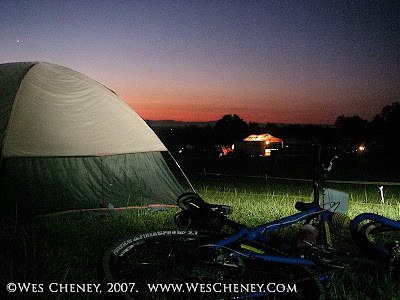 I think my mistake started before the Shenandoah Mountain 100 even began, just after the 5 AM bike-mounted gong and the 5:15 gratuitous fireworks display. I hadn't had all that much water to drink the night before, and in the rush of the morning, I didn't drink anymore water, just a redeye of fresh-brewed espressso and cold-brewed coffee. But I did have a double serving of oatmeal, along with a banana (for cramping), a handful of gorp, and a fresh breakfast burrito courtesy of Bill's girlfriend Dana. So by the time I reached the somewhat chaotic start line, I was fueled and ready for launch, but not sufficiently hydrated.

I didn't see Floyd Landis (or "Loyd Flandis," as he was listed on the registration check-in sheet, right below Liz Schleeper, the top Women's Masters finisher), but then I was more concerned with finding a place to start in the back of the pack. So I lined up behind Shrek. Shrek's a Clydesdale too, right? 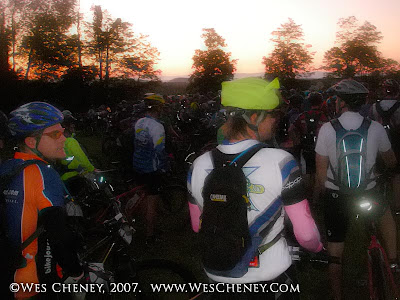 Maybe the start was fast and smooth for Loyd Flandis, Chris Eataugh and Sue Haywood, but in the back of the pack, it quickly devolved into a trackstand contest. Still, by the time we hit the iron bridge, we were rolling pretty smoothly. 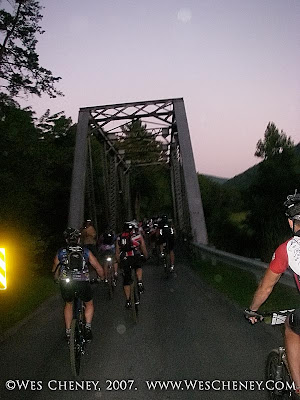 While I've done trail rides with a dozen or two people, I didn't exactly enjoy my first taste of singletrack in a race. I ended up hiking my bike through technical sections that I know I could have cleared if I'd been riding by myself. But stick a score or two riders in there, and someone's bound to dab and stop at the front of the line, bringing the whole darn thing to a dismount. 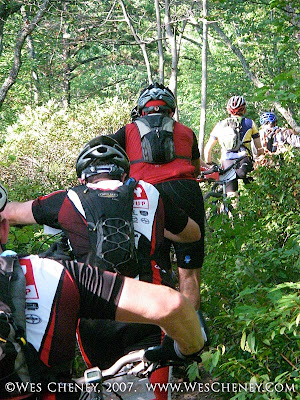 Still, I felt strong for the first 32 miles. When I rolled into the first real aid station at Todd Lake, I was happily surprised to see my wife and daughter, Jennifer and Abby, standing in the long line of cheering family, friends and "fluffers" {Chris Scott's term, not mine} along the roadside (thanks Mike & Sally!). I was only running 10 minutes behind my goal time, and I could easily attribute that to two unplanned stops for an issue with my Topeak seatpack. (Long story short- the "Quickclick" mount ain't made for downhill mountain biking, even when backed up by a bungee cord. But that doesn't weaken my faith in seatpacks for the trail.) 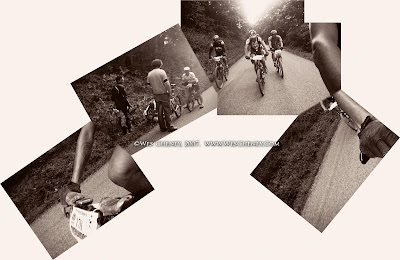 It was on the paved section down to Hankey Mountain that my legs started to cramp up. By the time I was climbing Hankey Mountain proper, I was in serious pain. I couldn't ride for more than a hundred yards without my thighs advancing from almost cramping to painfully knotted beyond belief. I'd get off my bike and walk uphill for another hundred yards or so until my calves cramped up. Then I'd get back on my bike and ride until my thighs cramped, too. And so it went, up and over Hankey Mountain.

At Aid Station 3 I guzzled several bottles of water, filled up my Camelbak, lubed the chain and swapped out my rear cog. With the Eccentric Bottom Bracket (EBB)on my singlespeed Gary Fisher Rig I could switch out cogs on the fly with just a couple of tools. The EBB can accomodate up to a 4 tooth difference, so I was packing a 20 and a 24-tooth cog. In effect, I was riding an old-school doublespeed. But two gears weren't enough to keep the cramps away...

It wasn't until I reached Aid 4 at mile 57 that I had finally hydrated enough to get past the cramps. The two steep climbs had been pretty nasty, what with my exercised-induced asthma. Without enough water in my system, the lactic acids dumped into my legs when I went anaerobic never got flushed out. And when my asthma kicked in, it shoved me right past my aerobic redline, and forcing my muscles to switch from oxygen to lactic acid.

Feel the burn.
Now hold it.
Hold it for five f**kin' hours.
Hold it till everything from yer ass to yer toes spasms.
Now squeeeeze...And repeat.
Feel yer lungs rasp for air.
Wave off the looks of concern from people riding past your pathetic, gasping ass.
"No, no, it's fine. I sound like this all the time."

It wasn't just my legs and lungs that took a toll on the trails. All of the walking up the steep, technical sections did a number on my new Rocket 7 shoes. By the end of the day the front soles were duct taped in place. 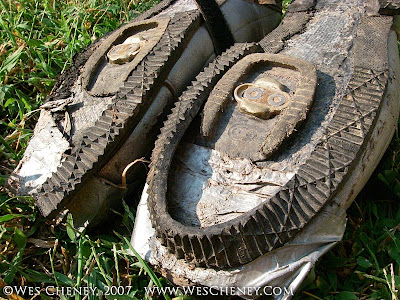 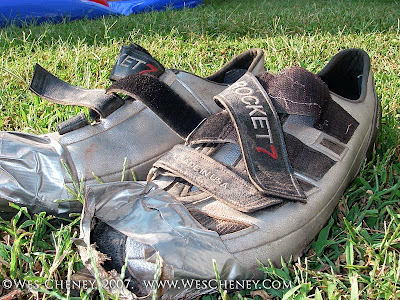 While the carbon-fiber footbeds make for the most comfortable shoes I've ever ridden in, the carbon fiber is also apparently a terrible surface for mounting any type of sole. A few pedal strikes on descents, and the sole was primed to be shredded on hike-a-bike ascents. Luckily the guys at Rocket7 said they'd replace my soles under warranty. I've gotta be careful though, cause I don't think they'll do that too many times...

After Aid 4 things got easier, relatively speaking. While Tim and Bill had both warned me about the interminable climb up Shenandoah mountain (almost 17 miles on continuous climbing), I actually enjoyed the long, steady uphill slog. I knew I had to get to Aid 5 atop Shenandoah Mountain before the 6 PM cutoff. After 6, no one would be allowed down the mountain for the last 25 miles to the finish line. I kept moving up the mountain, passing probably a half dozen riders along the way, encouraging them to stick with it. At Aid 5 I mounted my lights on my handlebar and helmet, changed my socks and bandana, topped off my reservoirs, and rolled out within 15 minutes, the wind ripping over the top of the ridge and nipping at my lycra-covered ass. As I was riding along the ridge and just about to start the final descent, an eight point buck, still in velvet, looked up at me, then bounded away before I could even think about grabbing a picture.

The descent down the mountain was just about as challenging as the ascent, but compressed. Whereas when going up the challenge had been to keep my legs moving, during the descent the challenge was to keep my legs still, keeping my body suspended over the bike, ready to absorb any bump or drop. When the trail would open up for a dozen yards or two I'd quickly spin my feet a revolution or two, then resume my grip on the brakes as the next challenge presented itself. After each descent I felt almost as exhausted as I had at the top of the ascents, my arms and brake fingers cramping almost as badly as my legs.

I made it to Aid 6 as dusk was truly falling, and after slipping on a long sleeve jersey to keep the mountain chill at bay, I pushed on.

The last 12 miles were relatively painless, but the exhaustion of riding so hard for so long was creeping over me. Time and again the urge to stop and nap came over me, but I kept it at bay, knowing that if I slept, I'd most likely wake up shivering with hypothermia, and the shivers on top of cramps would definitely be unpleasant. So I slogged on, forcing myself to sip from my Camelbak, even though the lady at Aid 6 had added insufficient water to my pouch of drink mix. The result was syrupy sweet, but I drank it anyway.

While the last singletrack descent into the campsite was made more interesting by the artificial LED lighting, it wasn't any more difficult that our winter night rides at Ipswich. The last challenge on the trail though was man-made. As I came to the end of the trail, some jackass had parked his truck to point the headlights toward his tent, and the trailhead. I was blinded by the headlights, and I couldn't see the dude as he cheered me on, "Keep going, man! You're almost there!"

I couldn't see anything beyond the headlights, such as the course markers I'd grown used to for hundred miles. "Which way do I go?" I asked,

"Which way?" I asked again, then saw a glint of orange to the left. Sure enough, there was a trail marker. I muttered something to headlight dude, then resumed my ride down the hill towards the finish line.

I gotta give credit to Chris Scott for setting up a downhill finish line. No matter how exhausted you may feel after a hundred miles, the downhill still lets you finish fast. A cheer went up as I rode to the line and banged the gong, relieved to have finally finished. 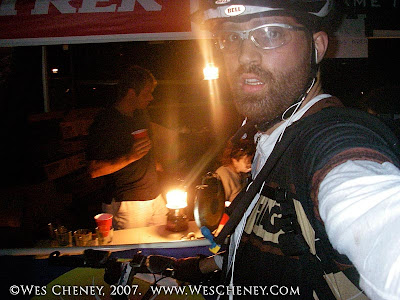 I stumbled back to our tent, and collapsed in a chair, a wave of nausea rolling over me. After fifteen of the most intense hours I had ever experienced in my life, I was finished. And, maybe, ready for more next year.

And now, some random pictures:

My chain after 100 miles and ounces of oil: 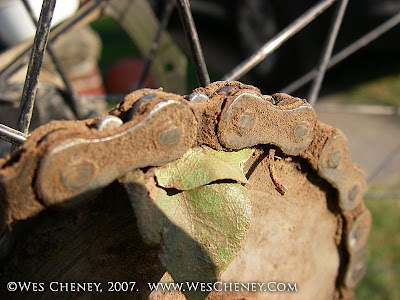 My bike comupter & couse profile. The computer reads only 89.5 miles because I pushed my bike uphill for 10.5 miles so slowly that the miles didn't register: 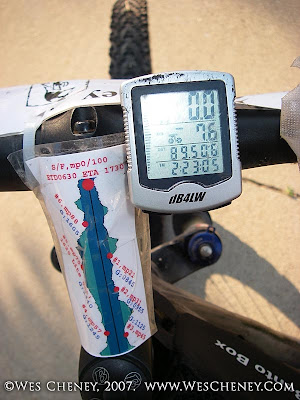 Abby on the drive home: 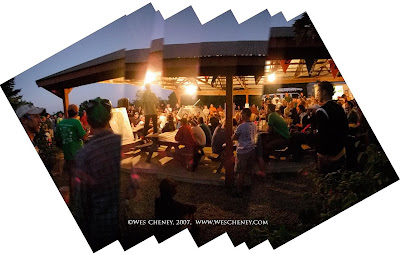