Solstice Sunride: Come On Down!

If at first you don't succeed...try something different...

I want to submit an entry to the 2010 Bicycle Film Festival (my 2008 entry wasn't selected...c'est la vie). I've wanted to "observe" the Winter Solstice for some time now. And, I'm fascinated with Norfolk's emerging bike culture. So I mashed up all three and present... 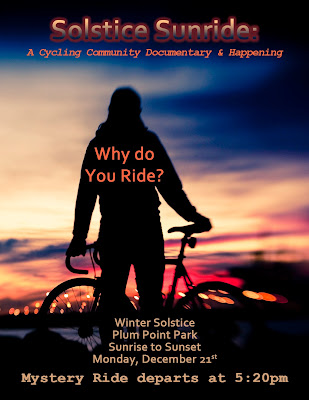 On Winter Solstice, next Monday, December 21st, I will be shooting a film at Norfolk's Plum Point Park, on the Elizabeth River Trail in West Ghent, overlooking the riverscape. I will be setting up at least one timelapse camera to record the sunrise, transit & sunset on the shortest day of the year. And, I will also be making portraits and recording interviews with Norfolk cyclists during daylight at Plum Point Park.

So ride out before work, after school, or during your lunch hour. Pose for a picture, sip a warm cup of freshly mulled cider, watch the sun slip across the sky, and answer the question,

Now here's the really fun part...at 5:20pm we'll get on our bikes & ride from Plum Point Park: I'll be leading a mystery ride on a spontaneous route to an undisclosed location. Riders will be invited to participate in traditional solstice celebrations, including a yule log & warm grog. 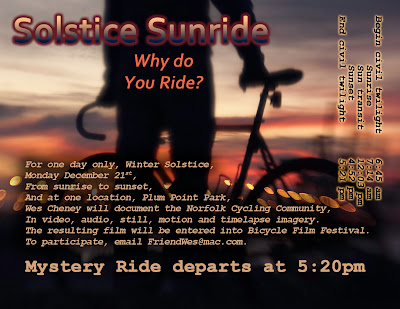