Alright, the ending is kinda choppy, and the editing is MacAmateurish, but I've been itching to try my hand at video. So I mounted a couple of Pentax Optio WP cameras on my Gary Fisher Singlespeed & went for a ride around the block.

Let me know what y'all think...

A sweet little cylcocross movie...I ain't that much into racing, but this is one fine little video!

Monday was the last of our East Coast Monday Night rides on road bikes. More often than not Abby's with me on Monday nights, rolling along in her little trailer behind me. But as Abby's gotten bigger, I've found that I can't keep up with the paceline at 20+ mph, especially not if there's anything but a tailwind. So for the last time this year I found myself on a solo, slower shortcut, waiting at an intersection for the light to change, knowing that the fast guys would catch up with me in the next mile or two. I was taking the middle lane behind a couple of cars (the right lane was right turn only), waiting with the rest of the cars for the light to change. But an ambulance came through the intersection just as the light changed for us, and by the time it got through, the light changed again, and we were stuck again. A guy waiting to turn out of the 7-Eleven parking lot had his Subaru SUV pointed straight toward me, apparently waiting to merge in behind me.

He stared at me for a minute, then at Abby's trailer behind me. I didn't think much of it until he asked me, "Is that a baby in that trailer?"

"Is that safe? What if she drops off?"

Drops off? I thought?, Burley trailers do not "drop off." There's a safety strap designed just to ensure that!

But instead of saying what I thought, I merely answered, "She won't."

And then the light turned to green, and I was off, keeping to the right to let the fairly light traffic pass by.

Two miles later, as I pedaled down a quiet two-lane suburban road past an orchard and an elementary school, a Subaru SUV slows down beside me, and I look over to see the safety-conscious driver from the 7-Eleven leaning across the passenger seat as he took a picture with his cell phone. Unbeknownst to me, I had been tailed by an undercover agent of the Suburban Vigilante Safety Patrol (SVSP). As he pulled away from me, only to come to a stop at the light at the intersection a hundred yards ahead, I thought to myself, I gotta find out what gives...

I rolled up next to Mr. Undercover Safety and asked, "Hey man, what's up?"

"I can't believe you're pulling a baby in a trailer, it's not safe!"

"It's not safe to pull a trailer on a highway!"

"No it's not! What if somebody didn't see you and hit you?"

"Well, what if somebody didn't see your car and hit you?"

"That's not the same. Look, I have a trailer for my kid, but I won't take her anywhere but our neighborhood and dead end streets. You can't bring a trailer out here, it's not safe! I almost didn't see you back there!"

Truth be told, the most unsafe driver I had seen was Mr. Undercover Safety himself, who had been taking a picture of me with his cell phone while driving his car down the double yellow line of a two lane road. And if he hadn't seen me back at the 7-Eleven, then how the heck did he initiate our conversation?

"Hey, green light, time to go, buddy," I instructed as I waved him forward. He turned left onto Northhampton Boulevard (4 lane divided highway, 55mph speed limit), while I went straight onto another quiet suburban street (2 lanes, residential, 25mph) that hooked left and ran parallel to Northhampton Boulevard. I looked over my shoulder to see that Mr. Undercover Safety was now creeping along the shoulder of the highway, pacing me while he talked on his cell phone! Disgusted, I hopped off my bike and dragged Abby's trailer across the grassy shoulder to his car.

"I'm looping around to Northampton Boulevard!" I shouted, although he may not have heard over the raised windows and air conditioning. "If you want to follow me, just look for the group of bikers coming along behind me. You can't miss them!"

He seemed to be trying to ignore me as he talked away to his cell phone. I persisted though,

"Sir, you're creating a traffic hazard! You're going to have to move along now, this is a highway!"

With that I turned around to resume my ride, only imagining what he must be saying on his cell phone:

"Nine One One, what is the nature of your emergency, please?"

"There's a guy on bike riding down Shore Drive!"

"I'm sorry- what is the nature of your emergency, sir?"

"This crazy guy is riding down Shore Drive with a baby trailer!"

"Is he obstructing traffic, sir?"

"No! He's just riding down the road next to the white line! Cars are passing him just fine in the left lane. But you've got to understand he's got a baby trailer. And lights! He's got lights!"

"Yeah, there's like, these red flashies on the back of bike, and a headlight that's so bright I thought he was a motorcycle!"

"I'm sorry sir, but I don't think there's anything we can do."

"But you've got to do something! He's got a safety flag on the trailer and everything!"

Well whaddaya know, 2 miles later he finds me again! Apparently he was listening to me as I shouted at him from the shoulder, because as I was riding through a light industrial park next to the airport, who should cross the intersection in front of me in a slow and purposeful manner but Mr. Undercover Safety! I let go of the handlebars & gave him a big double thumbs up. I really was looking forward to talking to him again, but unfortunately he gave up the chase after slipping into a back parking lot.

So Mr. Undercover Safety, if you're still out there, here's a bicycle safety website for you to check out. According to bicyclesafe.com, less than 2% of the 44,000 traffic deaths last year were cyclists. And cycling is almost 20% safer than driving! According to the Bicycle Almanac, "An average of 16.5 cyclists per million die every year in the U.S. (For motorists, it's 19.9 motorists per million.)" And finally, according to the British Medical Association, the health benefits of cycling outweigh the traffic risks by a ration of 20 to 1.

Given all that, the odds are that I'll outlive Mr. Undercover Safety and his kid. Yeah, instead of plopping my daughter down in front of the idiot box to watch another episode of Baby Einstein while sipping on Kool Aid and eating Coco Puffs, I took her for a bike ride.

All right folks, it's coming time to put up the skinny-tired road bike and pull out yer fat boy mountain bike!

That's right, we're swapping out road bikes for mountain bikes. Beginning next week, sunset will drop on Norfolk at 7:16 PM. And the week after? 7:05 PM. The days are only gonna get shorter...

So Liz & I, as the official ride leaders, have decided to make the switch. For the next 6 months, here's what we'll expect on the Monday night ride:

3) Lights. Both front and rear lights are required. If yer a bike geek and you know it, strap on that helmet light and clip a taillight to yer ass.

4) No iPods. No Aero Bars. You don't need them in the city on an night group ride. Leave 'em at home.


Having said all that, let me make my pitch for my favorite city tire and bike light: Schwalbe Big Apple tires and the Cateye HL-EL530 LED handlbar light. They both just rock, and Mike at East Coast Bikes will be happy to hook you up with both.

As the winter settles in, the Weak shall be Separated from the Crazy, and Yea, a Call shall Issue Forth from my Cellular Phone:

"Are we riding tonight?"

"Speak thus to my people: They shall call unto Thee, and Thee shall say unto them:


And now, here's the route:

And finally, a picture of my Big Apples: 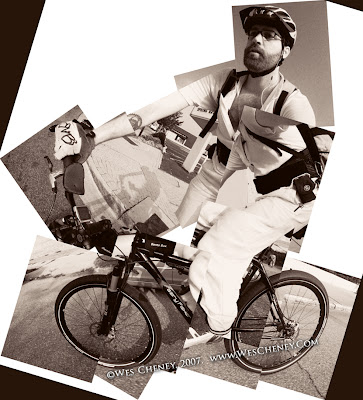