A fine piece of legislation that can be summed up in the graphic above was vetoed by the governor of Texas, even though it had wide support from a large number of groups, including the AAA.

Read more details at BikeTexas.org.
Posted by Unknown at 20.6.09 No comments: 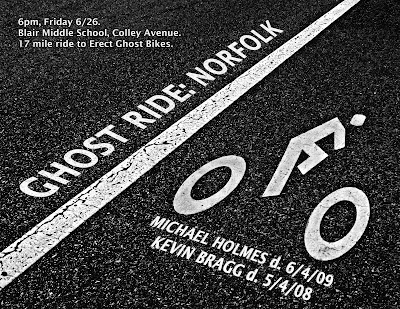 In the past year, two cyclists have been struck and killed by automobile drivers in Norfolk.

Next Friday, June 26th, we will have a special Critical Mass ride to remember those cyclists who have been killed, and remember that there have been no legal consequences for their killers. We will place Ghost Bikes on Tidewater Drive and Little Creek Road to mark the spots where Michael Holmes and Kevin Bragg were killed.


Ghost Ride: Norfolk will start and end at Blair Middle School on Colley Avenue in Ghent, start time 6pm. Total mileage will be 17 miles. For cyclists preferring a shorter route, there will also be the normal Critical Mass ride through Ghent and Downtown Norfolk. The route of Ghost Ride: Norfolk can be seen here: 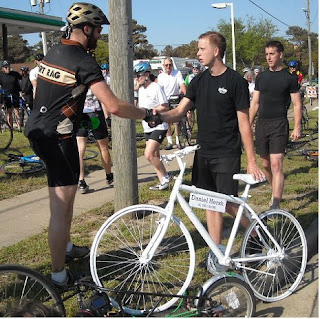 Fox News Veers to the Right, Runs Over Cyclist

Don Broderick, a news writer at Fox, has been arrested for dragging a cyclist 200 yards with his SUV, Gawker has confirmed.

Brian Dooda, a 34-year-old resident of Brooklyn, told the New York Daily News on June 10 that Broderick knocked him down, forcing him to cling to the hood of the car. Dooda said that as Broderick accelerated, the two made eye contact through the windshield.

"He was expressionless, he didn't say anything," Dooda said.

Dooda posted his full police testimony about the incident on a cycling message board. Here's a choice excerpt:

"The driver then accelerated, lunging straight into me, knocking me and my bicycle to the ground and to the left side of his car. I quickly got to my feet and positioned myself in front of his vehicle to prevent him from fleeing the scene. I called out to bystanders to call the police and yelled at the driver that he was insane, he just hit me, and he can't leave. The driver again accelerated into me, with no intention of stopping, forcing me, prostrate, onto the drivers side hood of his vehicle."

Is it too soon to make a joke about the dangers of veering too far right?

Coming Down to Reality: Another Cyclist Run Over 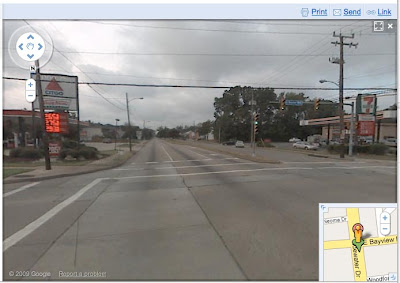 Tidewater Drive and Bayview Boulevard
All too predictably, while I was off in Tennessee on a family vacation, another cyclist was run over by an (apparently) inattentive driver, this time in Norfolk.

Michael Holmes was, according to the police, obeying traffic laws, riding on the right side of Tidewater Drive, when he was struck from behind and killed by an unnamed person overtaking him in a pickup truck, in broad daylight.

And thus far, no charges have been filed.

I've been struggling to find the mental energy to respond to the death of a cyclist that is even closer to home. I've written my City Council representative, Dr. Theresa Whibley, who is herself an avid cyclist.

Norfolk's Commonwealth Attorney, Gregory Underwood
Justice is selective. The Commonwealth Attorney does not choose to prosecute all offenses. While there may be a law and legal precedent, in the perceived absence of a public will to convict, an elected prosecutor will not seek a conviction.

According to Section 25-386 of the Norfolk City Code, "Applicability of traffic regulations to [bicycle] riders,"


Every person riding a bicycle or motorized skateboard or scooter upon a street or roadway within the corporate limits of the city shall be granted all the rights and shall be subject to all the duties and responsibilities applicable to the driver of a motor vehicle under the laws of the state and the traffic ordinances of the city, except as to those provisions which, by their very nature, can have no application.


Cyclists have a right to justice, posthumously or otherwise. The man who struck and killed Michael Holmes should be charged with a crime.

If they desire reelection, elected officials respond to their constituents. Please take the time to contact Mr. Underwood and ask him to protect the safety of all users of the road. Mr. Underwood can be emailed at cwainformation_at_norfolk.gov.

If you are a Norfolk resident, please take the time to contact both your Ward and Superward delegates to City Council. Contact information and email addresses can be found on the Norfolk City Hall webpage.

If we do not speak up, cyclists will be equal users of the road in name only.
Posted by Unknown at 17.6.09 1 comment: