Norfolk Bike Cops- Get Off the Sidewalk! 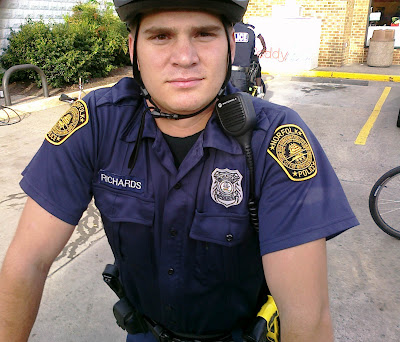 I was on my way to join the Wednesday night road ride out of the Norfolk Conte's when I saw a squad of bike cops riding north on Granby Street, single file, along the sidewalk. They stopped at the 7-Eleven at 38th & Granby for refreshments, and I took the opportunity to engage them.

While adult cyclists in Norfolk are legally obliged to ride in the road, Norfolk bike cops can ride on the sidewalk whenever they darn well feel like it.

Why? Well, I got three different answers to that question from a squad of Norfolk's "finest." I'll leave you to judge the lameness:

1. "The department won't buy us rear-view mirrors."
2. "The sidewalk is safer because we're targets."
3. "The Supreme Court says we can."

So let's take a look at each of these excuses for failing to follow the rules of the road:

1. "The department won't buy us rear-view mirrors."
Rear-view mirrors are not necessary to ride safely on the road. A cyclist is far more likely to be injured by what's in front of them than by what's behind them. And it's hard to lend much credence to budgetary woes when the officers in question are riding $2,000 bikes, and their utility belts are sagging under the weight of radios, handcuffs, tasers, batons, pistols and pepper spray. The Norfolk Police Department can't pony up $5 for a helmet or handlebar-mounted rear-view mirror? Please...

2. "The sidewalk is safer because we're targets."
One of the younger members of the bike squad asserted that it was safer for bike cops to ride on the sidewalk because they're targets in the road. But if some enraged driver wanted to run over a bike cop, I doubt that a six inch curb would be much of an impediment. I'll hazard a guess that the injury rate for bike cops is statistically proportional to that for civilian cyclists: in North America a cyclist is more likely to be injured and killed when they're riding on the sidewalk.

3. "The Supreme Court says we can."
Well, I can't argue much with this one. The Norfolk City Code allows city employees to ride on sidewalks. The Supreme Court has upheld that police officers are legally allowed to use lethal force and ignore traffic laws in the performance of their duties. I hardly think, though, that riding to 7-Eleven is a part of their official duties.

To argue by analogy, let's consider another police officer heading north on Granby Street to 7-Eleven. It's late afternoon, and traffic is heavy, so the officer decides to drive their squad car/motorcycle/paddy wagon on the sidewalk. In the abscence of any emergency, I believe that most law-abiding citizens would consider such behavior to be an abuse of power. Just because you can doesn't mean you should.

What our public servants should do is teach by example: Green light means "go," and red light means "stop." Signal before changing lanes or turning. Obey the speed limit. And if the protection of the public safety warrants, drive the wrong way down a one-way street, through a red light, or, on the sidewalk.

Bike cops neither protect nor serve the public when they ride on the sidewalk. In the abscence of a compelling duty, they need to get down off the sidewalk and into the gutter with civilian cyclists.

Labels: bike cops get off the sidewalk

This is ridiculous. It's great to know that if I get in an accident even bicycle cops have the mentality of "shoulda been on the sidewalk..." going in in their heads.

Their silent hubs are awesome though.

Targets? Do cops in cars consider themselves targets?Any motorist who hit a bike cop would have a whole library of books thrown at them! Another example of how the city doesn't properly promote safe cycling because so few in city government understand what safe cycling is!

Of course the best part of the story is that this all went down at our most favorite place, the Riverview 7-11!

I know this sounds like a joke, but today I saw a Norfolk cop ride his bike up the wheelchair ramp at the ODU library. Apparently he knows the security here is so bad that locking his bike up outside is too risky. I should try bringing my bike into the library.

Why does this not surprise me. Norfolk cops have always considered themselves above the law. Their cars ought to speak the truth "To Abuse and Harass"

As a bike cop (from Canada) I'll give you the rationale we use and the method to occupying sidewalks. What is the purpose of police on bikes? It is to interact with pedestrians and stop/prevent crime and public disorder. Where are pedestrians found? On the sidewalks of course. When you bike up behind a pedestrian with an open beer can, a joint(cannabis marijuana) or a crack (cocaine) pipe they do not see or suspect the police are behind them. If we were to be on the roadway flowing with traffic and looking out for cars we would not as easily be able to see what the pedestrians and park users are doing as we would have to look out for cars, traffic etc.

You have to think of bike patrol simply as 'A foot beat with a greater radius'. We simply are not there to interact with vehicles as they are too fast (obviously) which again brings me back to my original point which is we are there to interact with pedestrians in areas where cars (other police patrol cars) cannot go. These areas include but are not limited to:

Biking on the sidewalks allows us to meander slowly and flow with pedestrian traffic while keeping an eye on people.

I have been on the bike for a while and I cannot count the number of people I've completely surprised in the midst of an illegal act using these tactics.

I hope this answer is more satisfactory than the one you received.